We arrived in Saigon and our senses were immediately awakened. After a month in sleepy Cambodia it was a shock to the system to arrive in such a vibrant and chaotic, yet poetic city. The streets crowded with scooters and motobikes going every which way, fancy looking coffee shops on every corner, restaurants and shops eyeing for your custom, parks filled with people of all ages doing aerobics and yoga. Yes, we were definitely back in civilisation and it was a civilisation with a shot of Vietnamese coffee injected into its arm – lively, restless, energetic.

We fell in love with it in an instant. How could you not? Crossing the streets safely did take a little getting used to but once mastered then every crossing felt like a small victory which you had to smile at. To be fair, it’s not only the crossings that are dangerous, bikes whizz down the pavements if there is a shortcut to be hand so you need to always be on the look out.

Before we continue we should make clear that, yes, we do know that the city is now called Ho Chi Minh City (HCMC for short) but Saigon sounds so much better. It wasn’t until this trip and a visit to the War Remanents Museum that we even knew who old Ho Chi Minh was. Shame on us.

The War Remanents Museum (or the Musuem of American War Crimes as it was known until some good old US of A diplomacy got it renamed…plus a load of cash probably) in HCMC provides insight into the Vietnam war, how President Ho Chi Minh lead North Vietnam to “victory” and shows the toll the war still has on the country and it’s people. 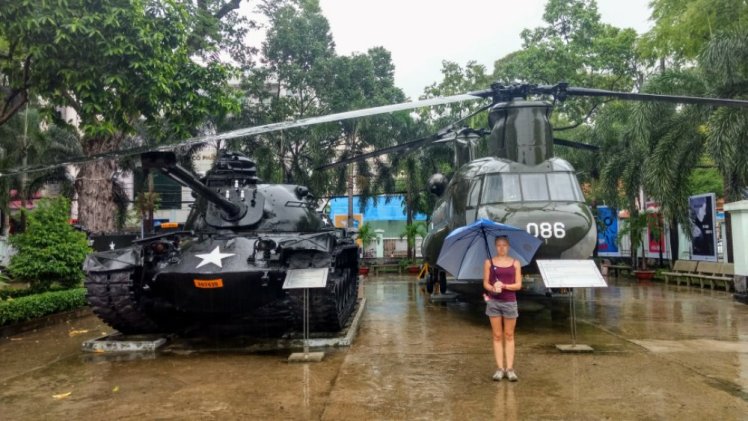 It was interesting walking around and getting insight – especially from a Vietnamese perspective. It was strange hearing and reading such harsh language to describe how the war played out to the misfortune of the US. The normal rhetoric I hear is of how great the US is blar, blar, blar, USA f@*k yeah. So hearing and seeing in the photos the cruelty that they inflicted on the nation of Vietnam for little to no reason and the devestation that their chemical weapons caused and still causes was shocking. It was especially emotionally difficult seeing the photos of Agent Orange victims who’s mutations and physical defects have such huge impacts on their lives.

Still on the theme of the Vietnam war we visited the Royal Palace which is where the US backed government of South Vietnam was based. This gave further insight into the leadership of Hi Chi Minh’s opposition…and had quite a cool bunker and helipad. It was also the place where the war came to an end as marked by one of Ho Chi Minh’s tanks driving through the gates of the palace.

We also did a day trip to the Co Chi Tunnels. The tunnels are a little outside of Saigon and provide insight into how the Vietnamese rural communities lived and fought during the war using a network of tunnels and booby traps. Getting to crawl through the tunnels was fun – although rumours on the internet say these ones are either fake or have been widened, but let’s not spoil the moment.

After that we had our fill of the Vietnam war so we spent the rest of our time wandering the streets of Saigon and absorbing the street life. This was mainly enjoyed sitting outside a bar with a 10,000VND beer (£0.33/$0.44). Cheers Saigon.

Sleep: We stayed at Toi’s Travel Home. It’s downsides are that it’s a 20 minute walk from the main backpackers area and there isn’t any social scene. However, it’s cheap, it’s really clean and the area it is in gives a great view into how local people live. We would stay here again.

Eat: There lots of street food to be had – the best street food breakfast we found was Ban Mi Hoa Ma – photo above and it was delicious. We also liked the food at the Royal Saigon Restaurant and the BBQ pork at this cheap place.

Drink: Beer is cheap here – yes! Bia Hoi (draft) can be found for 10,000VND but I found that it was often watered down and served in a glass that smelt of wet dog. Pay a little extra and get a Saigon beer in a bottle/can.

See: We would definitely recommend the War Remanents Museum and the Independence Palace. The Cu Chi Tunnels we thought was also good value for money and an interesting trip (even if the tunnels are fake) – we booked this with the Sinh Tourist for 110,000VND each and had to pay that again for entry fee. We walked everywhere in the city instead of getting taxi/bike and felt like we got a lot out of just walking the streets. The Jade Emperor Pagoda is a bit far out and we didn’t really enjoy it (I’m sure if you are into your pagodas it’s probably a nice one)

Moving On: The Sinh Tourist arranges buses onwards. If you are traveling the length of the whole country ask about their Open bus tickets – we didn’t and it may have worked out cheaper as basically you pay in advance for tickets to and from the key stops and can book any bus with 24 hours notice. We actually used FUTA bus again to get to Dalat which offered a better departure time and was slightly cheaper.

One thought on “Saigon Awakening”