It was August 6th 1945 when Hiroshima suffered from the devastating effects of the first atomic bomb used in war. The unwitting sacrifice of Hiroshima (and Nagasaki) brought an end to World War II. These events have had a huge impact on the culture, governance, attitude and outlook of today’s Japan and therefore I think Hiroshima is a must visit for anyone keen to really understand the Japanese psyche.

We spent one full day walking around Hiroshima visiting the key sights. The Hiroshima Peace Memorial Museum is a great place to start to remind you of the events that worked up to the bombs being dropped and the end of the war. Even though the exhibition was smaller than usual due to Olympic refurbishment work, it still offered an incredible amount of insight on the events that unfolded. There were two exhibition elements which surprised me the most:

Firstly, there was a video of personal recollections from many survivors. It was incredibly emotional hearing the stories of their survival where often the difference of life or death was a few feet in a certain direction (one gentleman told how his friend and he were at a window in their school when the blast knocked them off their feet. He fell between two desks which he believes helped protect him and let him survive. His fellow classmates weren’t so lucky).

Secondly, the large collection of letters from American/Allied scientists that worked on the bomb, including Einstein, that continually advised that the weapon should not be used with many believing that evidence of a test would be enough to bring an end to the war, avoid unnecessary casualties, and, having taken the moral high ground by not using the bomb, put the US and world in a better position to agree stop development such weapons and hence avoid a nuclear arms race. Whilst this may seem like clearly the better option, on the flip-side there are also letters stating that due to the money the US had spent in developing the technology they must be used to justify the cost (an incredibly bad reason), that victory by other means would give too much power to Russia in the peace negotiations and that the bombs would stop further loss of life. Whatever outcome other actions might have led to we will never know, but as things were, the outcome for the people of Hiroshima and Nagasaki was horrific and continues to put the world at risk.

After the Museum the next stop should be the Hiroshima National Peace Memorial Hall for Atomic Bomb Victims. A panorama of Hiroshima and it’s neighbourhoods at the time of the blast is in one of the bottom rooms, followed by a room with the names of the bombs victims. The architecture of this building provides a soft and reflective space for quiet contemplation.

In the vicinity you then have the flame of peace which will continue to burn until all nuclear weapons on earth are disposed of and the Children’s Peace Monument. This monument is to commemorate all the children who died from the bombs and the design of which is inspired by Sadako Sasaki. 2 year old Sadako survived the initial blast of the bomb but 10 years later was diagnosed with leukemia from the bomb’s radiation. It was then that, in accordance with the Japanese legend, she set about folding 1,000 origami cranes to be granted a wish. Unfortunately, later that year she died in hospital. There are conflicting stories as to whether she made the 1,000 cranes goal or not. Regardless, after her schoolmates raised the funds, this memorial of Sadako holding a golden crane was unveiled and is surrounded by 1,000s of paper cranes.

The next major sight to see is the Atomic Bomb Dome. Previously a Product Exhibition Hall, the ruins have been left as a reminder of the devastation the bomb caused. Everyone in the building died, but the building itself remained standing. Whilst many wanted it demolished along with the rest of the ruins, thankfully it survived and provides an eerie relic of the destruction. It managed to survive as it was close to the bomb’s hypocentre, which is actually marked by a simple plaque a few streets away. 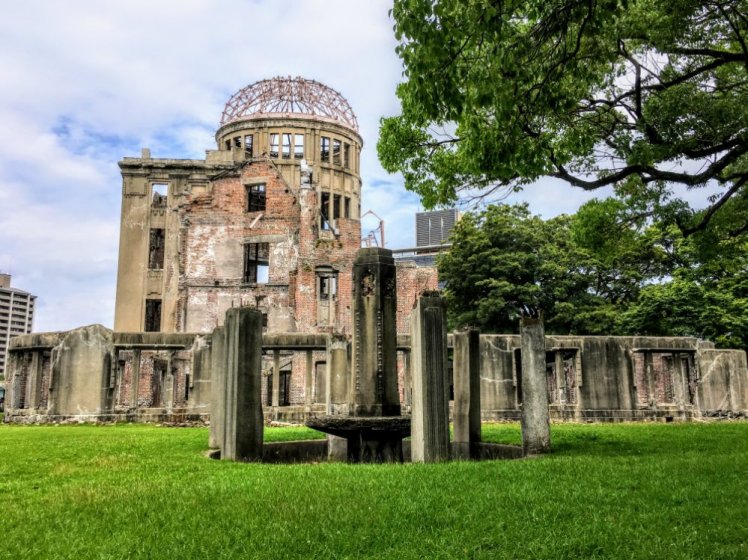 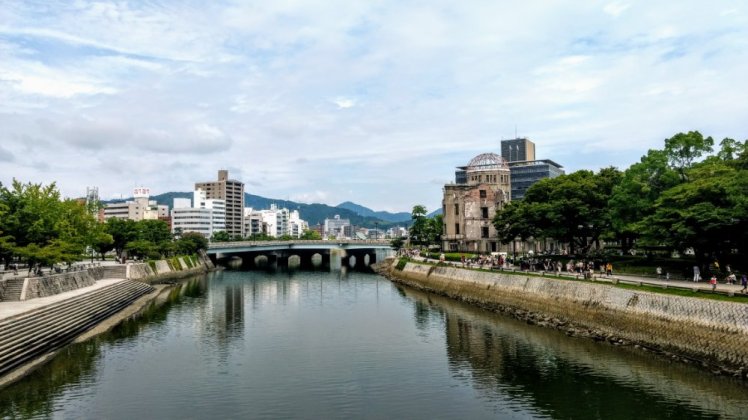 Getting a way from the bombings there are also more traditional tourist things to do in Hiroshima. Hiroshima Castle was completely rebuilt after being destroyed by the bomb and is a faithful replica of the original 1590s castle. Hiroshima also has great food and we’d definitely recommend trying their version of Okonomiyaki. We found a super place (our friend Moto from Tokyo would probably call it “dirty”) near the train station that was constantly busy with locals, had no English menu but served on mean Okonomiyaki for a great price. It’s also possible to get the ferry over for a day trip to Miyajima – we’ll cover this in a separate blog.

Overall Hiroshima was an emotional part of our Japanese adventure, especially due to the personal stories of survivors of the bomb. We met a survivor who since retiring spends his time helping tourists around the city. His attitude and reflections on what happened were remarkable considering the toll it took on the lives of his family and friends, and this is the view shared by almost all Japanese. It’s wonderful that out of something so destructive the Japanese have an overwhelming desire for peace rather than hatred; it’s such a shame that more governments and their people haven’t learnt from the destruction in the same way.

7 thoughts on “Hiroshima, Japan: The City of Peace”