As we weren’t in any rush we opted for a 3 day journey into Laos.

The journey was to include:

Pick up from Pai to Chiang Kong via Chiang Rai

We were picked up from Pai at an unheard of time in the AM to be taken to a bus station in Chiang Mai to get on another bus to go to Chiang Kong. Classic transport faff.

Our stop in Chiang Rai was just for a 20 minute look around the white temple. It was such a sunny day and the light was really bouncing off the temple making it glitter. It really is a beautiful site. 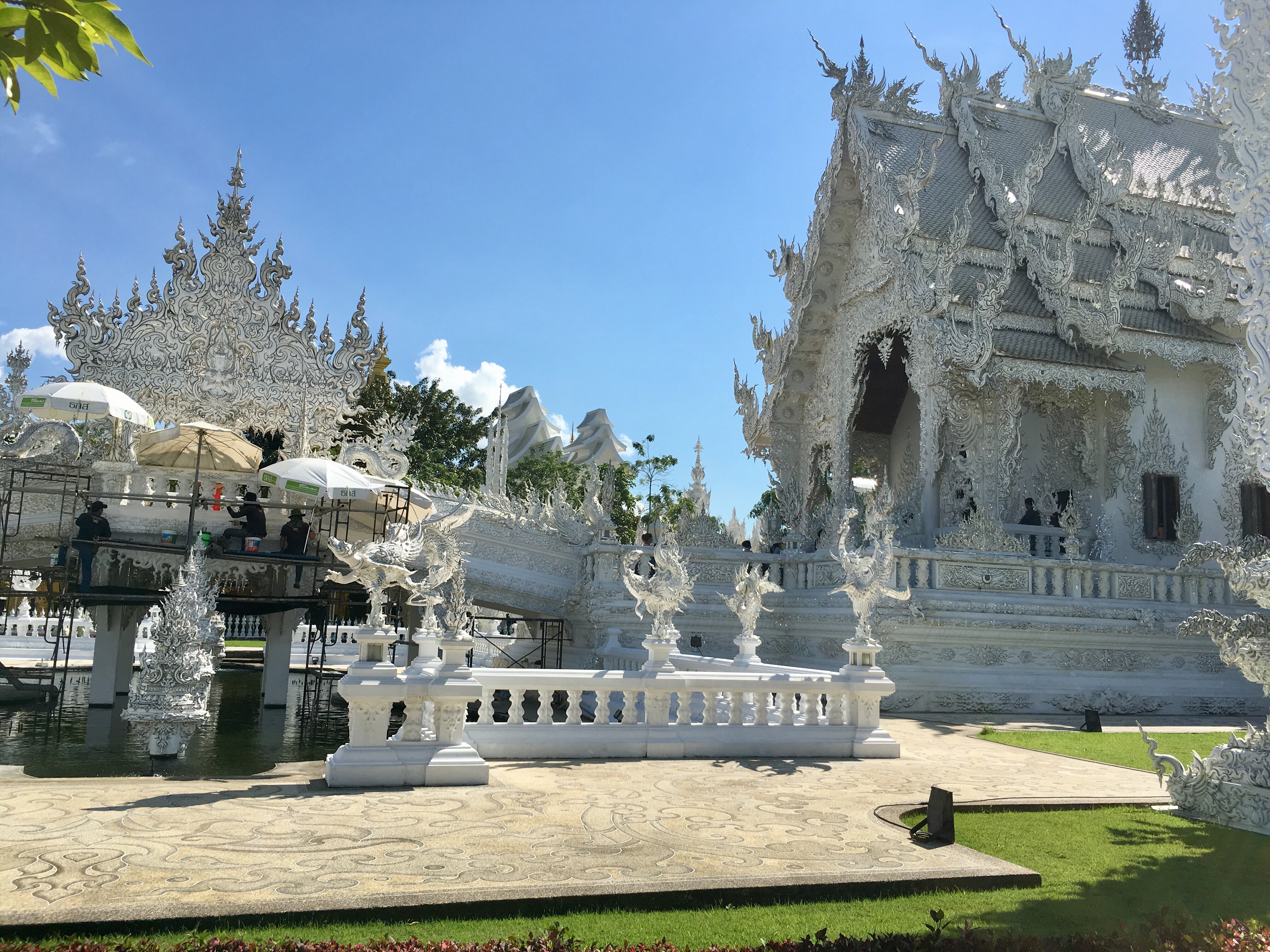 After that we boarded the bus again for the last leg of the journey that day to Chiang Kong.

Overnight stay in the border town of Chiang Kong

On arrival we were taken to our riverside hostel for the night and greeted by a Thai Action Man lookalike who took our passports off us to start the visa process before we were shown to our room. It may have been one of the worst rooms we had stayed in in Thailand, however we were lucky, we were given the only room with a balcony, so we sat out there and watched the sun go down over Loas before heading out for dinner. 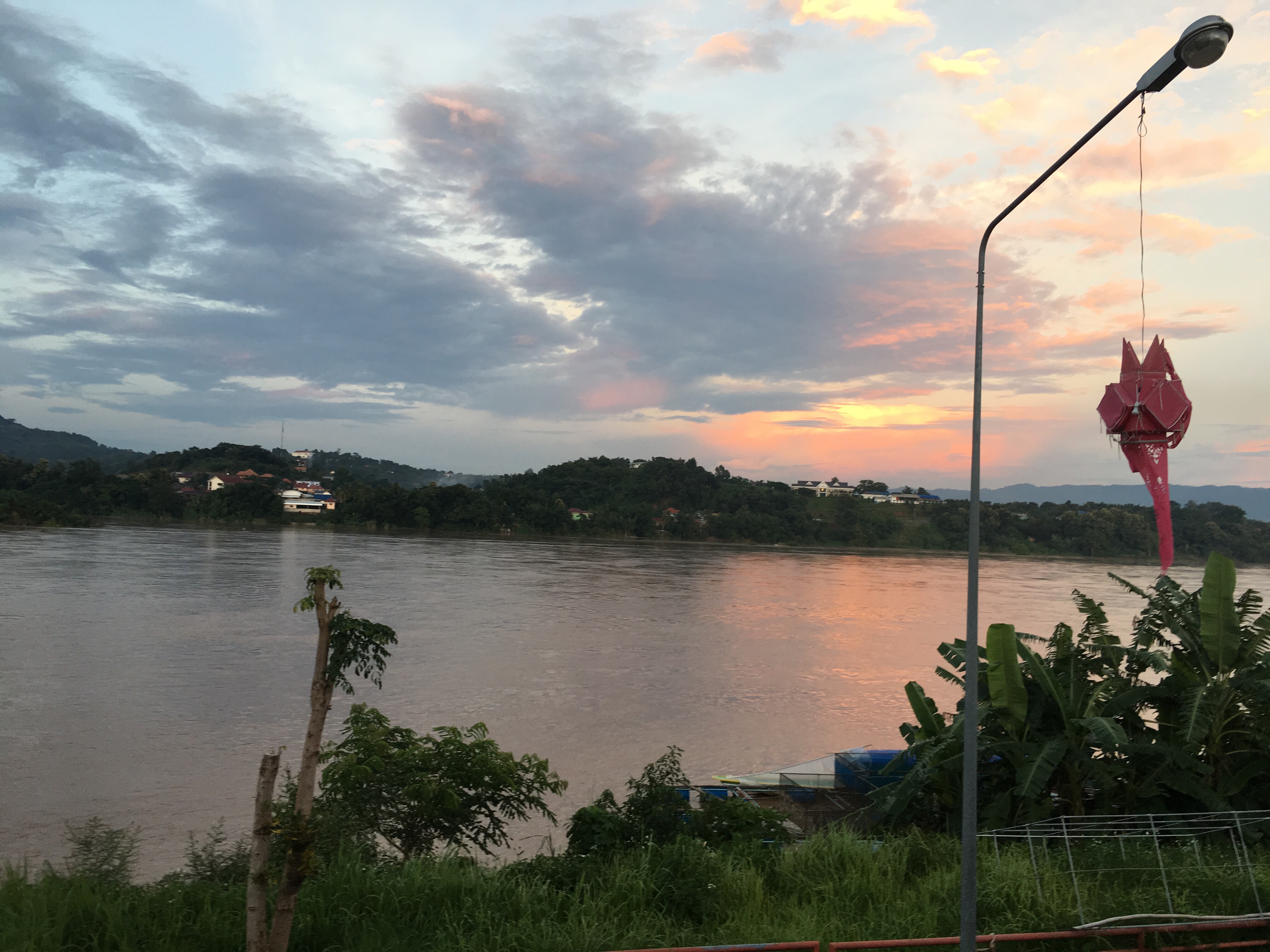 The town was very quiet with only a very few places left open for the evening with the other customers just being the other travellers waiting to cross the border. We wouldn’t recommend a trip there to just see the town.

Crossing the Laos border and getting a visa

In the morning we were bundled into another mini bus and taken to the border crossing. We filled in some papers, gave them to the necessary people, paid them some money and we were in! Easy peasy.

Once through the border we were taken to Huay Xai to wait to board the boat. We had been advised already that the prices on the boat were very steep so we stocked up on supplies of 6 large bottles of Beer Laos and some sandwiches.

When it was finally time to board we sat ourselves down at the front of the boat away from the noisy engine in the sociable seats facing each other and made friends with our fellow travellers who we would inevitably bump into for the rest of our time in Laos. 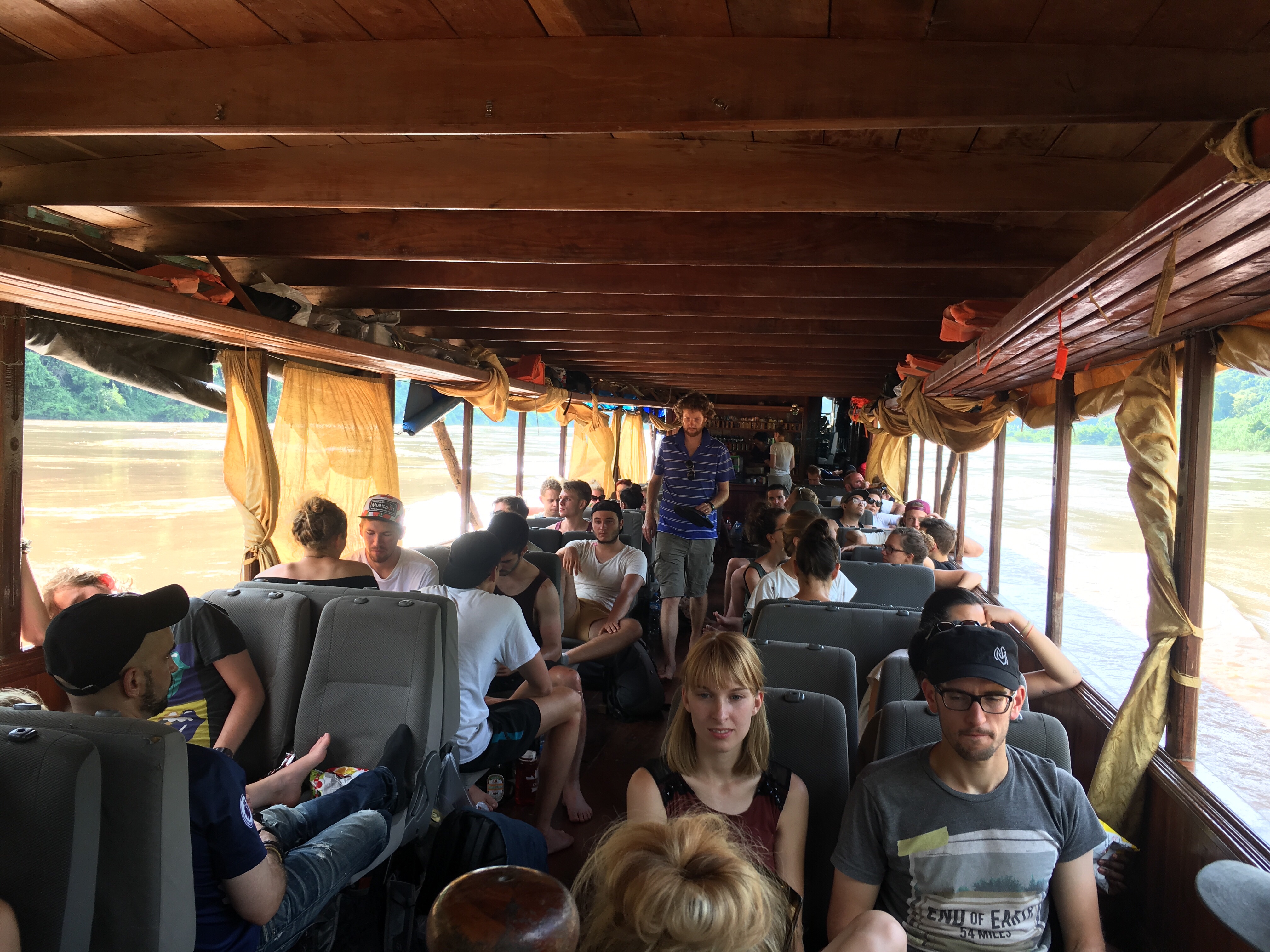 Lots of chatting, drinking and taking photos of the river ensued for the next 6 hours until we arrived in Pakbeng 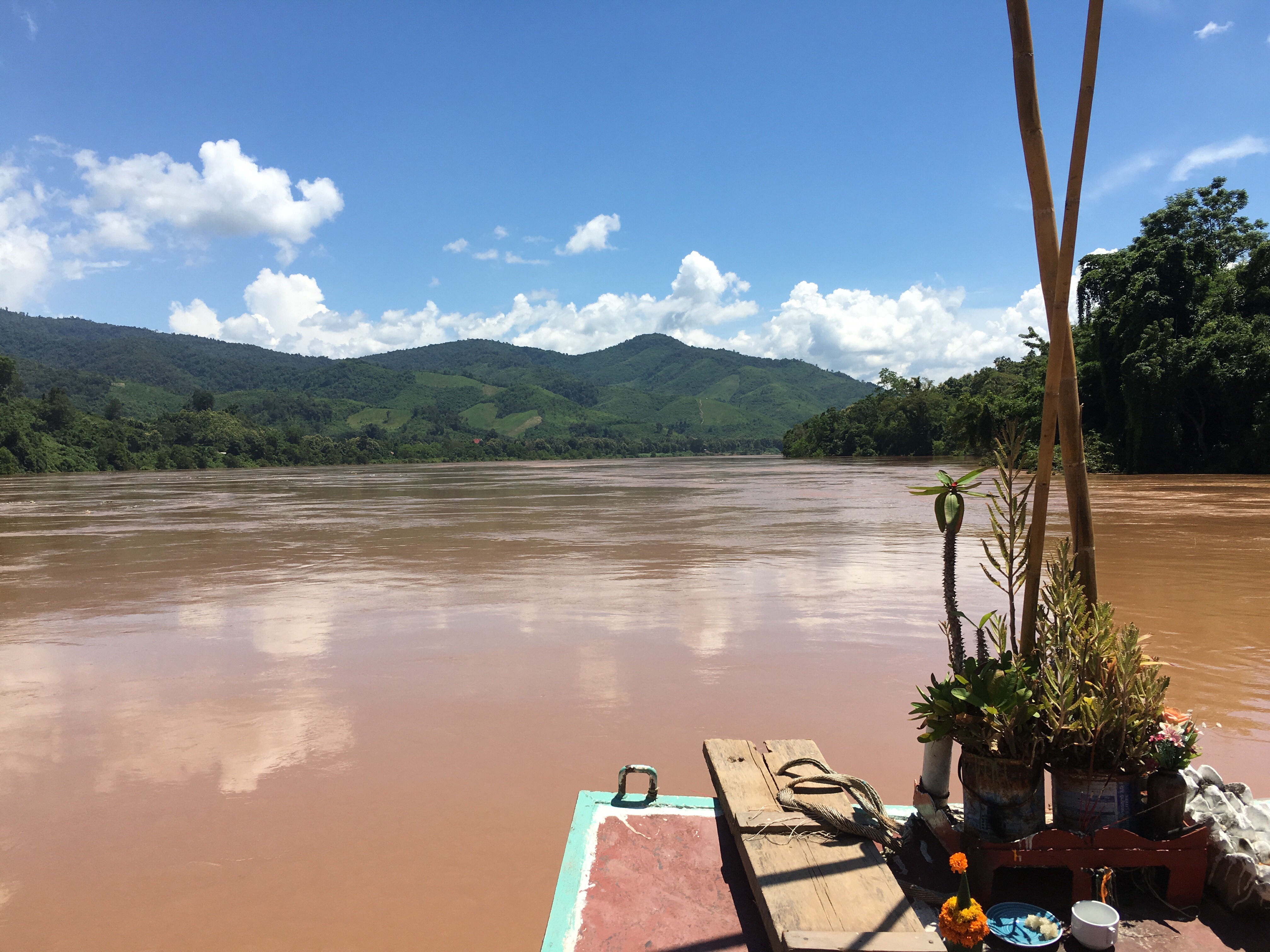 The travel package doesn’t include a hostel for the night and it’s evident that all the hoteliers in the area know this for as soon as you step off the boat (a bit wobbly after all the beers) you’re swarmed with people trying to get you in their lodgings. Prices and quality were all very similar so the decision wasn’t too hard.

Pakbeng like Chiang Kong seems to solely occupied by people there for the boat stop over, again it’s a quiet little town with few places to choose from to eat or entertain yourselves which was fine for us as it had been a long day and were ready for bed.

The next morning we realised we had ran out of cash as one of us had spent it all on drink the day before (we’ll let you guess who) but unfortunately the only two cash machines in the area weren’t working! We needed money to eat and to pay for our transport once we were off the boat so it was a bit of a problem. After hopelessly trying the cash machine a few times we succumbed to the idea of having to ask one of our new friends to lend us money. Luckily we found a hotel manager who agreed to act as a beuro de change for a very small fee. Fantastic! These Laos people were friendly and we didn’t have to borrow money so soon into new relationships.

The second day on the boat was a lot more subdued than the first, from party boat to chill out boat. There were also a lot of locals on board this time who obviously know the drill and had taken all the good seats at the front before we got there. 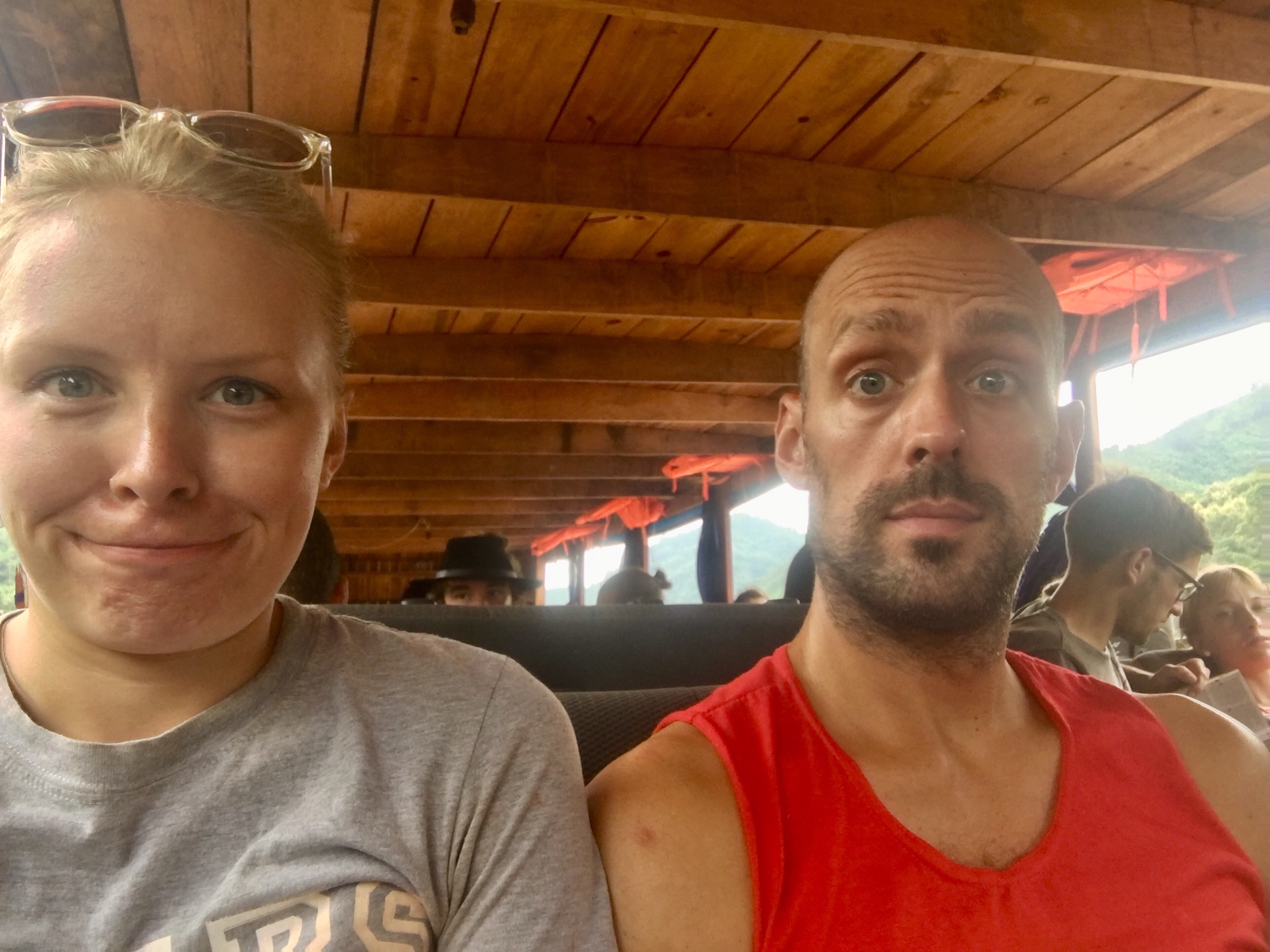 Whilst cruising down the Mekong Delta it was interesting as always to see the families who live by the water. The children play in the water so happily with no fear, whilst the water is so brown most people on the boat would be concerned about what’s lurking in it.

Some men sell fish that they have caught that day to other passing boats. Our boat driver bought a fish off one of the men and it was MASSIVE! Apparently it was left flapping around in our toilet for a while after. Sorry, we didn’t look to take a photo.

A few hours later we arrived in Luang Prabang, getting off the boat there were tuk tuk drivers and people trying to sell you a room at their hostel everywhere. We had our room booked already and the tuktuks were a set price, so we jumped into the first once and started off on our adventure into Laos……

Stay: The accommodation in Chiang Kong was arranged by the travel company and even though it wasn’t the best we’d had it was fine for a night and we got breakfast

As we said, in Pakbeng all the hostels are very similar in quality price so don’t worry about sorting anything out before you get there. You can ask to look at the room before you agree to stay there which you may want to do just to check you won’t be chucked in a pit.

Do: Purchase food and drink before getting on the slow boat. The slow boat people will drop you off at a restaurant/shop near the boat departure point, this place is overpriced, head up the hill 1-2 minutes and you can buy much cheaper sandwiches and beer. Prices on the boat can be up to 4x the normal price

Support our blog by using the below link to buy your goodies from Amazon UK: