We were very excited about the next leg of our Oz Campervan Adventure taking us from Melbourne to Adelaide as we would be travelling along one of the world’s most scenic coastal drives – the Great Ocean Road. Rugged coastlines, the 12 apostles rock formations, rainforests and, the icing on the cake, the Round The Twist lighthouse. Let’s have it!

Leaving Melbourne behind we started on the Great Ocean Road. From Melbourne this goes through two seaside towns named after UK counterparts, so, after being away from home for 7 months we thought it only right to stop at Torquay and Anglesea. Thankfully both of these towns have beaches to rival those of their UK names sakes and we enjoyed strolls along their beach fronts and by the ocean.

Our next stop was the stuff of childhood legend. The Round The Twist lighthouse! If you’ve never seen the Round the Twist children’s program of the 90s then I’m sorry to say you missed something epic. The program focused on the weird and crazy life of the family who lived in the lighthouse. Rob has two favourite episodes which he still remembers fondly and which tell you a lot about the humour of the program. In one the main kid of the show doesn’t take his shoes off for a month and then uses his aromatic feet to make teachers and family members pass out. And in the second the same kid drinks loads of water, doesn’t go to the toilet for a week and then goes on to win the pissing up the wall competition in the boys’ urinals. Classics! I’m sure now you know why this was a firm post school favourite. Anyway…the lighthouse was a good opportunity to reminisce and had stunning views along the coast. 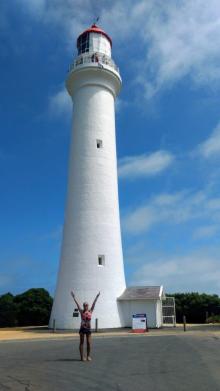 From there we headed to the free Big Hill campground a little inland in the Great Otway National Park. This was a great find in the middle of nature and quiet…well…quiet until we met some legends. Firstly, we met Fonz – instant legend status due to his name. But also, he was a true Aussie…he was drinking Fosters! Living proof that Aussies drink Fosters. We were then introduced to Jessie his girlfriend and two campervanners Jeroen and Jony. Together with two other late comers, McKenzie and Sam, we sat around the fire all night and got through a serious sizing of beer. We were beginning to feel like proper Aussie campers now! 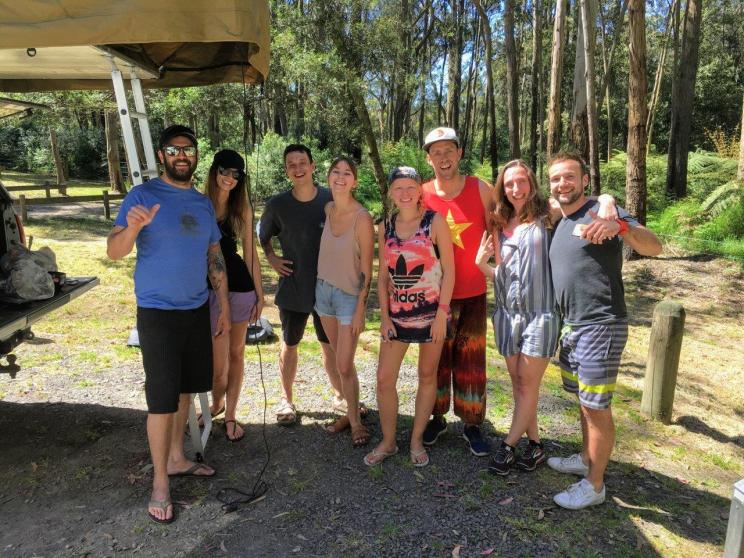 The next day the lot of us had sore heads. We decided to stay put for the day and made our way down to the local beach in Lorne to sunbathe away our hangovers and feed the parakeets before retreating to a quiet corner of the same campsite for another night.

Feeling a lot fresher we were excited to be hitting the road again. We headed to the beach to have breakfast by the sea and then started along the coastal road stopping frequently to admire lush beaches and rugged coastlines.

The main road then ventures inland slightly and snakes through the great Otway National Park. Here we found Maits Rest Rainforest Walk which provides a nice opportunity to leave the van behind for a bit and complete a short looped walk through the rainforest.

Afterwards it was back to the coast for the main attraction: The 12 Apostles. And what a sight they were. It really is a beautiful coastline so we spent a good length of time taking in the view and trying to ignore the bus loads of tourists frantically trying to get the best selfie.

A few more coastal view stops on the way to our campsite topped off the day perfectly.

We woke up slowly and decided to make the drive to the little town of Mount Gambier, across the state boarder into South Australia, without rushing. The weather took a turn for the worse so by the time we got there we made our way to the camping spot. This terrified us! Dry Creek Campground was shrouded in mist without a soul around. The wind was howling and we could see the outline of a few wooden shacks by the river – proper serial killer territory. We told ourselves to get a grip but were very relieved when two cyclists came by and were spending the night too.

Whilst the mist had disappeared the weather was still miserable. At least we had survived the night though and without the mist the campsite looked a lot less terrifying. We decided to spend the day in Mount Gambier library utilising as much free WiFi to download as many Netflix series as possible and back up our photos. We then headed to a different campsite for the night – one a little less Cape Fear-esque. 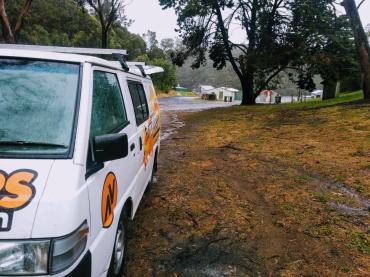 Sun! Yippee. In the sun, Mount Gambier has a lot more to offer than just a library (although it is a bloody good library!). Firstly we visited Mount Schank which is an old volcano where we walked around the crater rim enjoying exceptional views of the plains below.

Afterwards we completed walks around the Blue Lakes of Mount Gambier, enjoying more views and being impressed with how blue water can actually be.

With all the sightseeing done we were in the van and heading back into Victoria and then north to The Grampians National Park. On route we found heaven in the shape of a free shower at a tourist information centre – after 6 days on the road it was sorely needed and made us incredibly happy!

At the Grampians we found their free campsite and set ourselves up next to the BBQ pit ready for dinner. As more people arrived we befriended two Swiss couples (complete with Swiss army knives!) and shared tales of the road and crisps. We then got a surprise when our friends from a previous campsite turned up so the night turned into something a little heavier than expected. Great fun.

We shook off our hangovers and went off hiking. We decided to do the Wonderland Loop Hike so that we’d get to explore the Venus Baths, Splitter Falls, the Grand Canyon, Silent Street and the Pinnacle lookout. It’s a 9.6km hike and well worth it – even if you have to stop a few times to throw up (Louise!).

That evening we tried to venture to another free campsite in The Grampians but the only road to get there was a dirt track. Throwing caution (and the terms of our hire agreement) to the wind we gave it a go. We soon regretted this as the going got tough and incredibly slow so we turned around and headed back to the previous camp.

Before leaving The Grampians we decided to do one more short walk to see the Mackenzie Falls. We resisted the urge for a sort after “free shower” (something tells me the park rangers wouldn’t have been too please with us foaming up in there) and made our way north out of the Grampians. We were sad to leave this fantastically beautiful place and would have loved to have spent more time there, but we had to press on and had one more awesome sight to see just outside the national park…The Pink Lake.

When we had heard about the Pink Lake we assumed that was just some sort of nickname and weren’t expecting much. But oh my! Wow! The photos don’t do it justice. The lake gets its pink hue from either the minerals in the lake or its salt loving algea. Regardless of the science it’s amazing to see! 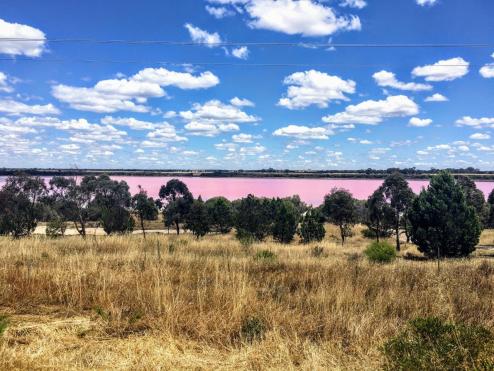 Our free campsite that night was in South Australia wine territory and was surrounded by vineyards. It would have been stunning if not for the vibes of the campsite. It seemed like most of the guests were “permanent residents” and the place was one step away from featuring in an Eminem music video.

We woke up and realised our campsite was named after the founder of the winery next door which did a free cellar door (tasting sessions). So we thought, what the hell, let’s get drunk. We put on our smartest clothes and headed over to the Bleasdale Winery. After we greeted the host she asked us what we’d like to try, to which we replied, “All of it!”. We’re not sure if it was this desire to drink as much free wine as we could that put her in a foul mood but she didn’t seem too engaged. We asked about the history of the winery and about its owners, to whom she was related, but got short, sharp answers. Thankfully the wine was a lot less sour than she was and we even ended up buying a bottle – the cheapest one though – in your face bitch!

The rest of the afternoon we spent at the campsite drinking wine, only to be disturbed by a Jehovah’s Witness trying to distribute leaflets entitled “Are you doing too much?”…I think not.

Today we would be arriving in Adelaide. Beforehand we decided to head to Hahndorf – a town in the outskirts of Adelaide which was settled by German migrants and is famous for its German architecture, food and trinkets. It was a pleasant little walk around the town but unfortunately it was too early for a litre of beer and sausage.

Afterwards we made our way to Mount Lofty summit for an amazing view over Adelaide. It was cool to get this perspective of the city and see it nestled within a squared outline of parkland. We also saw a wild Koala! Yippee!

If was then off to Adelaide for all the fun, and showers, of a big city!