Christmas, that time of year where everyone goes a bit silly, you wrap up warm, drink, eat, sing, see old friends and family and generally be merry. Well, when you are backpacking, halfway around the world from home and in a country where Christmas is in the summer, things feel a bit different. Here is our experience of Christmas when campervanning around Oz.

The run up to Christmas is non-existent for travellers who are constantly on the move. There are no office parties, mulled wine, Christmas markets, prezzie shopping trips or silly jumpers. There was limited Christmas music in Oz – well, songs like Frosty the Snowman, Let It Snow, White Christmas don’t really fit well in a country with 35 degree heat. Do They Know It’s Christmas? No. Sure, there are still pictures of Santa Claus up in the shops – but why would he be wearing his thick red suit in Australia? It doesn’t make sense. Oh, and what about the religious side? Well, Aussies don’t give a sheila about that so the only midnight mass you’ll find are the midnight mass-ive kebabs being consumed by the local drunks.

But we didn’t want to be all bah humbug about the whole thing so decided to make the most of our Christmas in the sun!

We wanted to be by a beach for Christmas day so we rang ahead at Workman’s Beach Campsite – we weren’t able to book ahead but the chilled sounding ranger just said to turn up and he’d find us a space. We headed over to the campsite on Christmas Eve hoping to find a spot – unfortunately every space was taken and there was a flock of campervans driving around in case a space became free. Not wanting to go anywhere else I spotted a gap between some wooden bollards which I could squeeze the campervan through and into a nice clear space under a tree – a perfect, although unofficial – spot. We just had to hope that the ranger wouldn’t give us a telling off. Thankfully he was as chilled as he sounded on the phone and when he walked passed and saw us he said, “Nice spot guys!”. Later on he came by to introduce himself as Ross and to collect money for camping. He said we could pay for just one night now and the rest later. His mannerism and chilled out attitude reminded us of the ageing rocker Billy Mack from Love Actually. One super laid back guy.

Waking up on Christmas day with the sun shining and putting on swimwear was a new experience. We started the morning with a croissant stuffed with scrambled egg and bacon and popped open a bottle of prosecco before heading to the beach to enjoy a quick dip in the sea and watched the morning tide. Perfect start to the day! 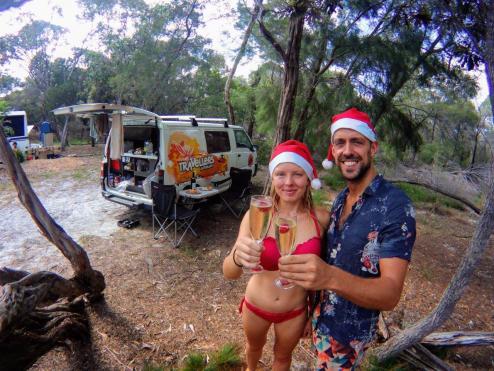 We decided to keep Christmas dinner traditional – and have a BBQ. Cooking up a feast on the camp BBQ in the open air definitely beats slaving over the kitchen oven whilst grandma is falling off a chair pissed. We were slightly distracted whilst cooking by a huge water fight all the camp kids were involved in. This led to frequent soakings and acts of retaliation. All good fun. We ate our mega Christmas burgers whilst watching a game of cricket that the ranger had organised with some of the families at the campsite. Not wanting to be made to represent England (and badly let England down) we were content enough to sit back, eat and drink beer.

Boxing day around the camp was fairly subdued as everyone was in recovery mode. As we were off the next day we said goodbye to awesome Ranger Ross who advised us that his colleague was the ranger tomorrow and would collect the money we owed for camping…he then added with a sly look, “but he won’t start to about 7.30-8am.” We took that as advice to leave early and get away without paying – which of course we did. Complete Legend.

Whilst it was truly an unforgettable and unique Christmas, it wasn’t really Christmas. We missed the excitement of the run up, the last minute shopping dash and the cold! Next year we will definitely be by the fire with traditional mince pies and warming mugs of Baileys hot chocolate.

One thought on “Oz Campervan Adventure Part 10: Christmas in Australia”